The Mid-Century
By Philip Stohrer 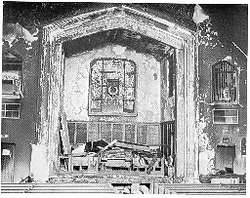 In October of 1947, the Reverend Chester Meengs was installed as pastor. During his pastorate, the Service Star Mothers dedicated a stained glass window behind the chancel in honor of those who had served in the recent World War. Also during this time, continued growth dictated the remolding of the church basement to create more classroom space. The balcony, designed when the building was first built, was added at this time. Reverend Meengs continued his ministry at Bethany until 1956.

In 1956 the Reverend Russell VandeBunte became Bethany's eighth pastor. During his three years, he finished a work begun by Reverend Meengs, assisting in the organization of Greenwood Reformed Church in Milwood, then the southern suburb of Kalamazoo. Twenty-four members left Bethany to assume new roles their. However, before Reverend VandeBunte left, thirty new members had been added-more than making up for the loss.

When Reverend Armand Renskers was called to Bethany in 1960, a need for more space was again apparent. Under his direction, the Gold Room, North Social Hall, Nursery and new offices were built. At the same time the Chapel, the South Social Hall and the main kitchen were remolded. The addition was dedicated on November 4, 1963. Reverend Renskers left Bethany in 1965.

The Reverend John W. Tien was installed in 1966. During this time, Bethany faced a new problem. Kalamazoo had grown beyond Bethany. What had once been the growing edge was now considered the central city. Housing began to deteriorate as long time residents moved to smaller homes or passed away. Many of the once fine houses were subdivided into several small apartments. As in the country as a whole, new opportunities and increased mobility led the sons and daughters of the church to new cities and new churches. For the first time Bethany's membership was dropping.

What followed was a time of trying new things and rethinking old ideas. New styles of ministry were tested. For the first time a staff ministry was created. A Director of Christian Education was added to attract young people. Jack Post was called in 1970 to fulfill this new role, providing leadership for the Sunday School and youth program until 1973. In 1974 until 1976, the Reverend Sandy Elfring led this ministry.

During this period of changing values and falling membership a single event stands out in the minds of the church. In the early morning hours of March 17, 1972, the Friday before Palm Sunday, vandals set fire to the sanctuary which resulted in its total destruction and heavy smoke and water damage throughout the entire building. Many questioned why this act of wanton destruction could happen to the church, but the members did not see it as a lack of God's grace but rather as a call of rededication to ministry to the neighborhood. The minimally damaged north wing of the church was cleaned and repainted in time for an Easter Sunday service in the social hall. By the following year, we were once again able to celebrate the risen Lord in a totally renovated sanctuary!

In 1976 new needs were identified and the Reverend Mark Kraai was called as the Pastor of Renewal and Church Growth. Pastor Kraai remained in this position until Reverend Tien left in 1978. At that time Reverend Kraai was installed as executive pastor and the Reverend Harri Zegerius was called to assist with calling and sharing in preaching.